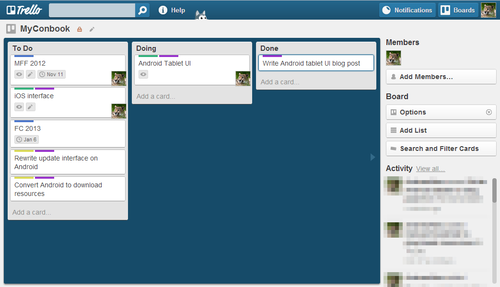 I’ve started using Trello for task management. Before, I would just have a huge list of things I wanted to do seperated by task in Evernote. This is okay to an extent, for simple lists, but I’ve found Trello is a wonderful way of going about managing tasks.

I’ve moved a lot of these sorts of lists into Trello, including for all my software projects as well as several other personal things (like stuff around the house, day job items, etc.) and find it to be a very well structured way of organizing my data. I like how instead of just having a basic “todo” list, I can customize each board however I like, allowing multiple categorizations, different approperations of tags (the colors), and especially multi-user support. I could so see a team working with it as a “to do” list instead of purely a bug tracker. Each item can have comments, due dates, images, even multiple checklists. The concept of moving a todo list out horizontally makes it a very powerful way of organizing data.

The screenshot above is for MyConbook. The layout for that is a pretty standard todo list, but if I wanted to I could create separate lists for upcoming conventions, Android, iOS, Web, etc. and organize everything independently. Not restricting me to how the application feels I should do things makes me want to do everything this way. I had been considering setting up a bug tracker just to track these sorts of things. I feel that this lets me do both - each project can be both a to-do list and track bugs I want to take care of. If a project has an external bug tracker, like on say Github, I can still add an item here and handle public communication and resolution externally.